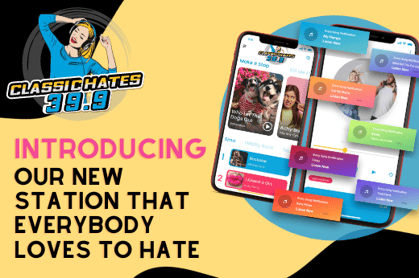 Zimmer Radio is pleased to announce we are bringing a new radio station to Joplin: “Classic Hates 39.9!” On Classic Hates we will only play the worst rated songs in history, the songs that get stuck in your head and make you wish you could erase your memory entirely. As a company, we believe in pioneering radio excellence and, as such, this new station will be the first of its kind. No other radio station in the world uses our new format.
Look forward to hours of absolute nausea as we play song after song of the worst the music industry has to offer. When you’re bored of cliché “best of” stations, Classic Hates is here to give you a much needed respite from quality, enjoyable music. When you’re on your morning commute you’re not in the mood for upbeat music, you need a station that matches your mood - you need Classic Hates.

We’ve dug through the worst rated songs throughout the decades to bring you the truly most awful songs in history. Take a look at a preview of the lowest rated songs you can expect to loathe on Classic Hates:

It’s too bad to be true! The station you never knew was missing from your life is here not to stay! April Fools! There is no such thing as Classic Hates 39.9 and there will be no app.