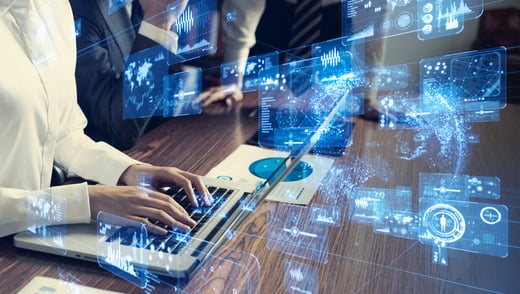 The short answer is that it would be a mistake to abandon tried-and-true practices for the lure of digital. This either/or thinking is a trap.

Combining digital ads and traditional advertising can be a powerful combination. Together, they can provide a multiplier effect making both more effective.

How Can Radio Amplify Digital Marketing?

Radio is particularly effective in amplifying:

While radio has its own audience, it also allows for cross-promotion that can yield a higher ROI.

Even though consumers have more choices than ever, listeners tune in to radio, on average, five days a week. Compared to streaming audio online, 93% of the total listening is done on traditional AM/FM radio.

Billboards, flyers, brochures, and other print materials can complement digital campaigns. When used in combination with digital, Out of Home (OOH) advertising drives three times more digital and social activations than digital alone.

The availability of OOH advertising is growing. Electronic billboards, kiosks, store displays, and video screens at gas pumps have increased the options. OOH can be especially effective in combination with mobile ads for location-specific advertising.

People still spend more time watching television than any other form of media. In 2019, the average person spent more than 5 hours a day with the TV on.

Studies show TV still has a significant impact on purchase decisions. 56% of consumers say TV is the most important driver of awareness. That’s larger than all other forms of media combined.

Television can deliver mass audiences while digital can target narrow segments. They work together to drive brand awareness on a broad scale and in niches.

When Is Traditional Advertising Not Worthwhile?

Advertising works when consumers hear consistent messaging over time. It takes a combination of reach and frequency to be effective.

The only justification to stop using traditional advertising is if none of your customers go outside, listen to the radio, watch TV, or interact with individuals that use traditional media.

Often, digital interactions start with offline media. Two-thirds of online searches are driven by offline advertising, according to a study by Jupiter Research.

Some marketers are increasingly competing for the digital space while ignoring traditional advertising. Others believe the myth that traditional marketing channels are dead. This represents a significant opportunity.

Not everyone uses the internet regularly. Consumers who don’t are hard to reach unless traditional advertising is incorporated into media campaigns

Your marketing strategy should include the use of traditional advertising and digital advertising. Used together, they can increase the effectiveness of both advertising methods.