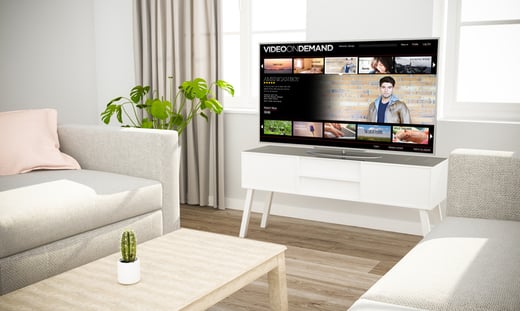 Across the United States, only around 65% of households subscribed to cable or satellite in 2018--a number that has continued to decline in recent years. As many as 74% of households subscribe to at least one streaming service, and the average household subscribes to three or more. Many cable TV subscribers spend more time streaming content than they do actually watching cable. OTT is taking over a space that was traditionally filled by primary television advertising--and it's becoming increasingly important for advertisers to consider the importance of this medium.

Increasingly, people are "cutting the cord" with traditional television services and moving to OTT and streaming services for their daily consumption of content. Increasingly, users appreciate the convenience of OTT services: they can choose what they want to watch, when they want to watch it, and pause or replay content as needed. At the same time, OTT services often cost less than traditional cable or satellite, which means that an increasing number of consumers are making the move to these vital channels. OTT services also allow for specific demographic targeting.

Why You Should Invest in OTT Services

OTT ads are easier for consumers to interact with. This medium of content is being watched across many different devices, anywhere, at any time. People are streaming content during their daily commute, watching it on breaks at work, and engaging at home. This means that there is a higher likelihood of people seeing those specific ads than there is of people seeing television ads. Not only that, but OTT ads are also more convenient: you don't have to assign them to run during a specific time slot, where it will only be viewed during that specific time.

Seventy-six percent of people who watch streaming content use an ad-supported service. In many cases, by allowing ads, they can pay less for the service itself. Not only that, but ads on many streaming platforms also do not allow users to skip that content. Since millennials can spend as many as seven hours a day streaming content on their phones, that provides immense opportunity for your business to connect with potential customers.

Furthermore, OTT allows for a higher level of engagement from users who are interacting with the ads. Often, users are on their phones and tablets while streaming content. As a result, they can respond immediately to the ad, whether that means clicking through to make a purchase, answering a question, or visiting your website on the spot. This immediate response can help raise sales and increase the overall return of your advertising investment. Keep in mind that users may also use their phones and other devices while streaming content on a large screen, allowing you to continue to see results no matter how they're watching your content.

OTT and streaming also allow for more personalized content than television advertising. You can choose to target your ads more directly to your preferred audience, presenting them with the content that's most likely to gauge their interest. You can choose to target your ads to specific shows directly or hyper-target them for higher levels of success. Not only that, but you can also easily retarget OTT users on other platforms and sites, including your other digital advertising avenues.

Advertisers are experiencing high levels of success with their OTT marketing tactics. This method has a high overall ROI, often climbing higher than traditional TV. OTT ad spend is growing exponentially--and with a good reason for savvy advertisers who want to continue to meet customers where they are, on the platforms they're already using.

If you're looking to expand your advertising, OTT is a highly effective medium that can help you improve your reach and get the biggest possible bang for your advertising buck. Through OTT and streaming advertising, you can also highly target your ads better than other platforms. This will allow you to more effectively reach your target audience and ensure that you're delivering exactly the content your users expect and want from your business.

The Zimmer Marketing team excels at delivering results from OTT advertising.  Zimmer can produce your video message and put together any type of video campaign for any kind of platform.